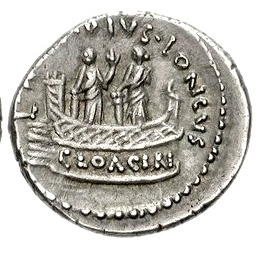 Her name was Cloacina which may come from the Latin word for purify (cloare) or for the Latin for sewer (cloaca).

Cloacina ruled over the ‘Cloaca Maxima’, or The greatest Sewer, in the city of ancient Rome. The Cloaca Maxima was originally built as an open sewer and canal by the Etruscans probably around 600 BC.

The Etruscan’s main purpose to this system was to drain local marshes to prevent flooding in addition to removing waste from their city and deposit it into the river Tiber.

By the time of the great Roman Empire, the Cloaca Maxima was covered and paved over becoming a main feature of the sewer systems that the Romans were so famous for.

“The extraordinary greatness of the Roman Empire manifests itself above all in three things: the aqueducts, the paved roads, and the construction of the drains.”

Cloacina’s name is probably Etruscan in origin but was adopted and used by the Romans around the 1st Century BCE. Her rule was over all sewage systems, not just the Cloaca Maxima.

Cloacina was responsible for the smooth running of all sewer systems throughout the Roman Empire and the protected the workers who maintained it.

A shrine was built to honour Cloacina directly above the Cloaca Maxima called Sacrum Cloacina and probably doubled as an elaborate manhole/access shaft. The foundations of this shrine are still in existence.

The outfall of the Cloaca Maxima is also visible today on the banks of the Tiber near the Ponte Rotto bridge.

Cloacina even made her way onto the face of a Roman coin minted following the death of Julius Caesar (c.44 BCE), depicting her shine in Rome.

She may have been honoured in this way because according to some writers, the Hall of Curia, where Julius Caesar was assassinated was turned into a public toilet because of the atrocity that took place there. The waste from that hall led directly into the Cloaca Maxima.

Although facts of this are now lost, it is probable that like other Roman deities, Cloacina was worshipped and offered rites, sacrifices and offerings to protect and look after the sewers and its workers.