A Navvy’s Life: A look at the life of the Navigators who shaped Britain 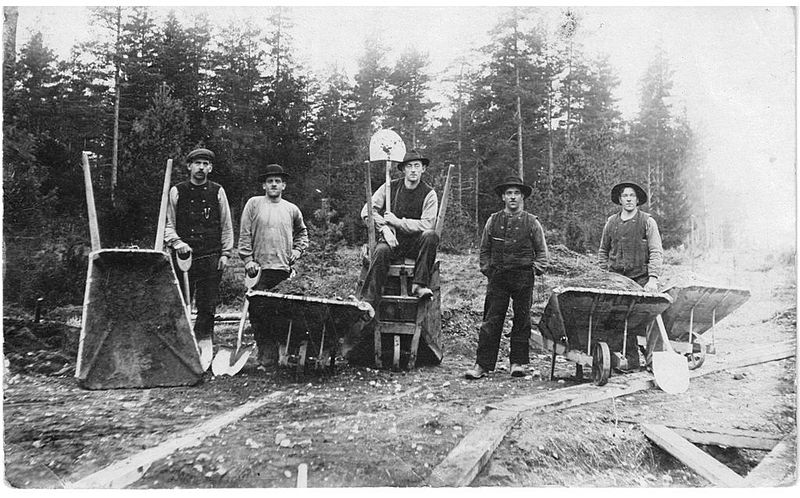 The Navvies were the manual labourers working on civil engineering projects that propelled the Victorian industrial revolution.

The term ‘Navvies’ came from a shortening of ‘Navigator’, a job title for those that dug out the numerous canal systems of the 18th & 19th Century. The term was subsequently adopted for manual labourers working on railways, tunnels, drainage and sewage systems, bridges and dams all over Britain and the world.

Popular belief that all Navvies were Irish probably stems from the great migration of Irish Navvies and their families to America on a promise of better pay and a better life, rather than on the actual Navvy population in Britain during the industrial revolution.

Author, David Brooke made a study of the British railway contracts of the 19th Century and the census returns of the time and concluded that most of the Navvies were born in Britain, and 30% were Irish immigrants. However, Irish immigrants were often unwilling to officially register with British officials

Most Navvies were single men, but some had families who often travelled from job to job with them, living in temporary accommodation. These wooden shacks were lacking even the most basic of amenities or comfort.

Theses temporary villages, called ‘Shanty Towns’ were prone to outbreaks of typhus, cholera and dysentery that could devastate the workforce and cause great delays to the works.

The archaeology TV show Time Team, filmed an episode titled “Blood, Sweat and Beers”, covering the living conditions of a railway navvies’ construction site that was in use for five years on the Settle-Carlisle Line. Through their excavations, the show was able to highlight the difficult working and living conditions that Navvies and their families endured.

A Navvy’s working day was long, hard and dangerous. Work-related fatalities were common, as was injury and infection.

Their employers would often find ways to limit or decrease their agreed wage (which was paid daily) if they were drunk, lazy or belligerent to a foreman. If a worker was sick or injured, pay was also deducted but meal tokens for use in company meal caravans were issued.

Due to the remote locations of much of the railway works, meal caravans accompanied the Navvies wherever they went, but the food was notoriously of poor quality.

It was not uncommon for engineering work to be abandoned during harvest season as Navvies skipped off their usual work for better pay and benefits helping a local farmer with his crops.

Living a hard life for little reward and taking great personal risk, inevitably led the Navvies to search for some relief. Because of the transitory nature of their work, sport or regular hobbies were hard to pursue. Mostly, they took to drinking and brawling – something they were very good at, as the physical power generated from their work made them fearsome opponents.

Because of all the work going on around Victorian Britain, the Navvy population rivalled that of an army.

The press was quick to pick up on the drunkenness and fighting conduct of the Navvies, reporting regularly on feuds, disputes and belligerent behaviour. The press portrayed all Navvies as crude intemperates with no respect. The general opinion of Navvies in the eyes of the public, soured.

But when the Navvies came to town to build a bridge or extend the railway, it wasn’t all fear and foreboding for the residents. Navvies were often seen as transitory ‘thick-heads’ so regularly under the influence that they could easily be taken advantage of.

Charles Dickens describes how one town was standing in readiness to profit greatly from the railway Navvies arrival;

“A brand-new tavern, redolent of fresh mortar and size, and fronting nothing at all, had taken for its sign The Railway Arms; but that might be rash enterprise – and then it hoped to sell drink to the workmen. So the Excavators’ House of Call had sprung up from a beer-shop; and the old established ham and beef shop, had become the Railway Eating House, with a roast leg of pork daily, through interested motives of a similar immediate and popular description. Lodging-house keepers were favourable in like manner, and for like reason were not to be trusted.”

The Poltergeist of Sampford Peverell

One particular incident involving Navvy drunkenness occurred in 1811 in the village of Sampford Peverell, Devon and became a national news sensation.

A local man, John Chave, resident of a well-known ‘haunted’ house was approached by a group of drunken Navvies.

The house had, for the last year or so, been the subject of great journalist interest as it was said to have substantial poltergeist activity. Naturally, being so close to a famous phenomenon, the Navvies wanted to talk to Chave, and see the house.

Chave felt so threatened and scared by the Navvies’s drunken behaviour towards him that he took a shotgun and fired a warning shot.

Unfortunately, the shot hit one of the Navvies, a Mr George Helps, and killed him. The death was ruled as a ‘Justifiable Homicide’ which further fuelled tensions between local inhabitants and the passing Navvy community around the country.

(Incidentally, the ‘hauntings’ in Chave’s house turned out to be smugglers behind a false wall. The house has since been demolished.)

It was quite common for a Navvy to change his name as he passed from job to job, especially if he had left trouble with the law behind him, or had previously been employed by the same corporation and not left on good terms.

This caused inevitable problems if the Navvy was killed or injured as his next of kin could not be called for.

In 1887, a plea was made for Navvies to keep their real names and addresses on a piece of paper in their pockets to save their loved ones distress, but few took this idea up.

One worker, who told his employers his name was Charles Fisher, had been killed on the works site. The effort to inform his relatives produced no results and it later transpired that he had also been known as ‘Reed’ in the past. In his pocket was a pawn ticket made out to the name of J. Wilson, but in the end, it turned out his real name was Peter Lendall.

The Navvies invented a rhyming slang, similar to Cockney rhyming slang, to stop their superiors from understanding their conversations. Some phrases include: